The Mesquite Police Department provides police services to the citizens of Mesquite and our guests.

The Mesquite Police Department provides police services to the citizens of Mesquite and our guests.

Yo Ho Ho! Join our Pirate Crew for this year's 2022 Trunk-or-Treat.

Presentation by Noon & Sunrise Rotary Clubs for the 2022 SOARS Awards for our FD & PD.

Mesquite Night Out - 2022 another GREAT EVENT!

The Mesquite Night Out 2022 was another GREAT success!

Presentation by Exchange Club to our First Responders, along with our Honor Guard.

What can you do to protect yourself?

Don Wodmancy has retired after 14 years

December 1st through the 31st, place a blue light in your window to show support for local law enoforcement personnel. 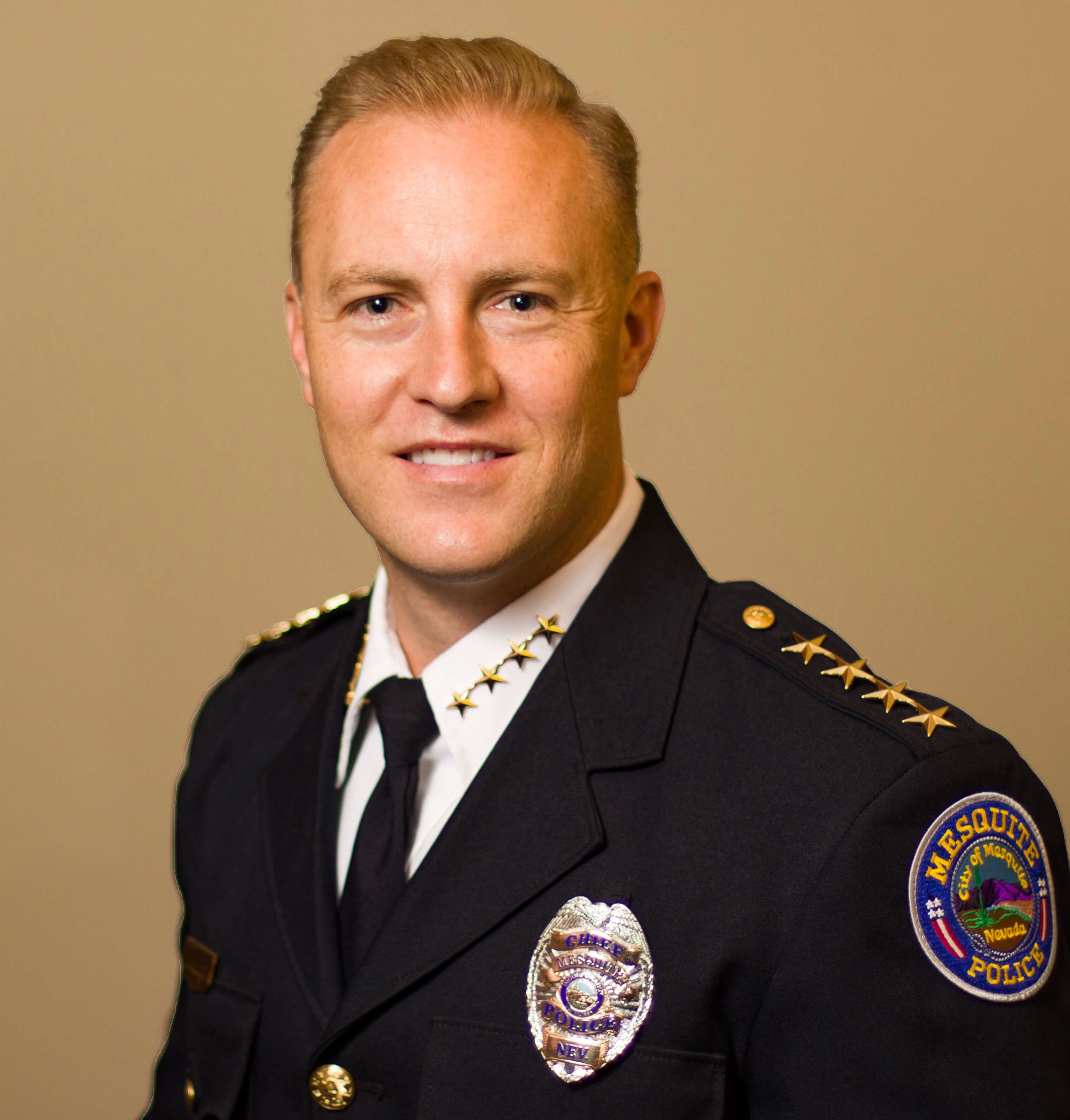 Mesquite Police Chief MaQuade Chesley began his law enforcement career in 2005 with the St. George, Utah Police Department. In 2007 he was hired as a police lateral with the Mesquite, Nevada Police Department.  Chief Chesley has assumed many leadership roles and positions during his service with the Mesquite Police Department which include: public information officer, rangemaster, police recruiter, SWAT officer, officer in charge, patrol sergeant, detective sergeant, patrol and investigations lieutenant, and police captain.

As a police captain, Chief Chesley managed many divisions within the Mesquite Police Department which include: patrol, general investigations, narcotics investigations, training, corrections, dispatch, animal control service, and the volunteer patrol division. Chief Chesley has served on the Nevada Child Assessment Center board of directors and is currently the vice president of the Nevada Federal Bureau of Investigation National Academy Association.

In 2019 the International Association of Chiefs of Police (IACP) selected Chief Chesley as a recipient of the prestigious 40 under 40 international award. “Hailing from 7 countries and serving in a broad range of roles, the IACP 40 under 40 awardees represent the top rising leaders from around the globe, exemplifying leadership, dedication, and service to their communities and the law enforcement profession.”

As the youngest police chief in Mesquite’s history he attributes his success to personal philosophies of altruism and people first mission second. Chief Chesley believes that officer safety is tied to wellness. As a police sergeant he established a department fitness center. As chief, he expanded the officer wellness program to include on-duty officer meditation and annual mindfulness training. Chief Chesley believes in community orientated policing and is committed to the safety of his officers and the community. 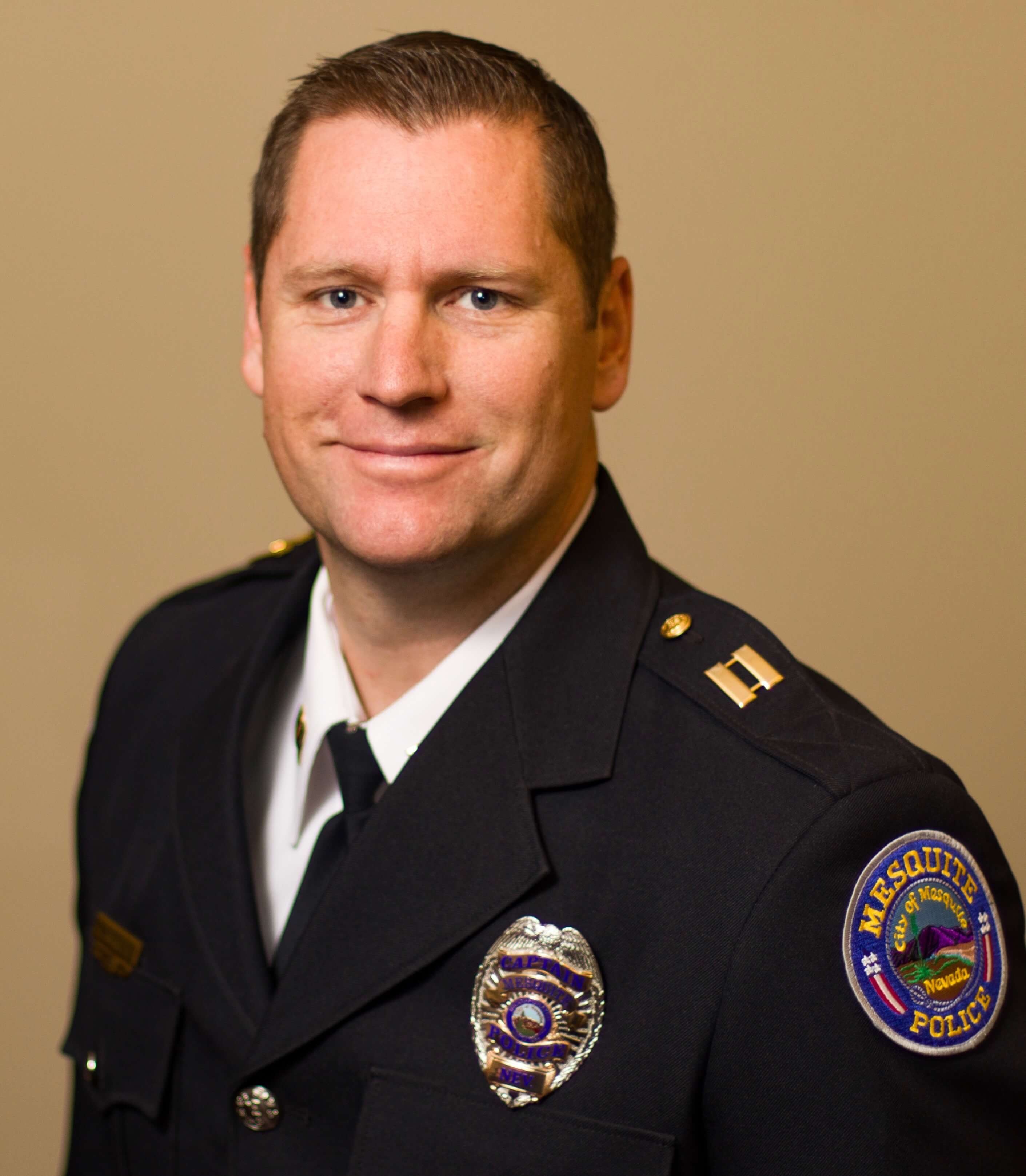 Captain Averett graduated from Utah Valley University with a Bachelor of Science degree in Emergency Services Administration with an emphasis in Emergency Management.  His current responsibilities within the Mesquite Police Department include overseeing the department’s records and evidence division, emergency communications/dispatch division, and the office of public information.  Captain Averett also manages the police department’s policy and procedure manuals as well as the records management and computer aided dispatch systems.  Captain Averett strongly believes in the value of Community Oriented Policing while fostering a strong relationship between all police employees, community members, and local businesses. 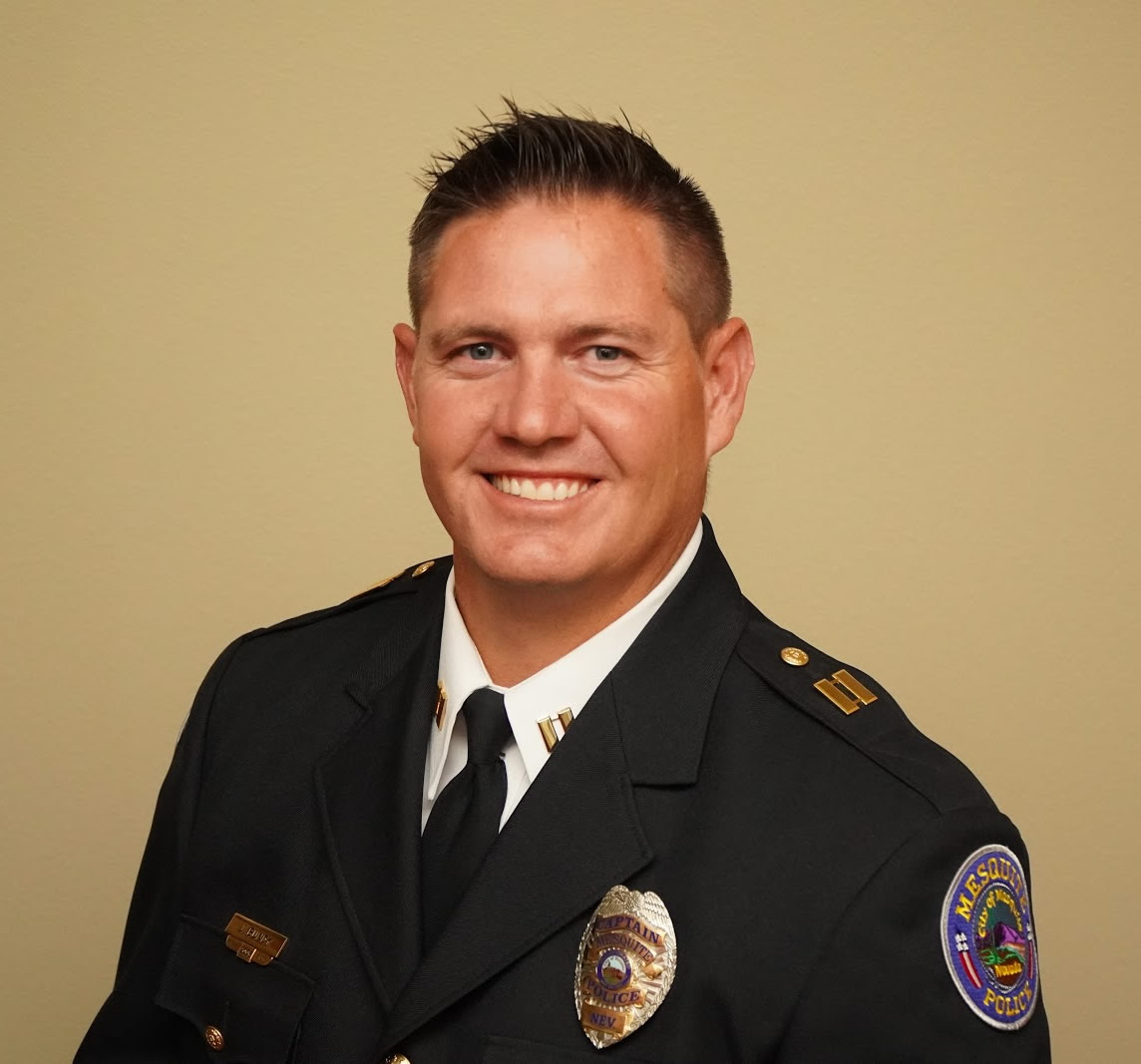 Captain Bundy is a graduate of Weber State University with a bachelor’s degree in Criminal Justice and Spanish. Captain Bundy manages the Patrol Division, Investigations Division, and the Mesquite Detention Center. Captain Bundy’s vision and goals in law enforcement are driven with a desire and belief of providing proactive policing measures in order to serve the citizens of Mesquite at the highest level. Captain Bundy believes this proactive approach to law enforcement is expected by every officer and these expectations should be completed with professionalism and integrity.

What is a Crosswalk?

Crosswalks are considered part of the roadway used to channel pedestrian traffic safely across the roadway. Crosswalks can be both marked and unmarked. Nevada Revised Statute (NRS) 484A.065 defines a crosswalk to mean:

Nevada Revised Statute (NRS) 484A.065 defines a crosswalk to mean: “1. That part of a highway at an intersection included within the connections of the lateral lines of the sidewalks on opposite sides of the highway measured from the curbs or, in the absence of curbs, from the edges of the traveled portions of highways; or 2. Any portion of a highway at an intersection or elsewhere distinctly indicated for pedestrian crossing by lines or other markings on the surface.”

(NRS 484A.095 defines any public road as a highway.) Accordingly, a legal crosswalk exists at all public street intersections whether marked or unmarked. However, the only way a crosswalk can exist at a mid-block location is if it is marked. The City of Mesquite uses the “bar pattern to mark crosswalks in accordance with the Manual of Uniform Traffic Control Devices (MUTCD), latest edition.

How are Crosswalks used?

Call 9-1-1 if there is a threat to loss of life or property. An emergency is any situation that requires immediate assistance from Emergency Medical Services, the Police or Fire Department. Call 9-1-1 to:

Mesquite Police Dispatchers take all of the 9-1-1 calls for the City of Mesquite. Las Vegas, Henderson, North Las Vegas, Boulder City and nearby Mohave County jurisdictions all have their own Police Departments. If you call 9-1-1 from a phone located in one of these areas, your call will be routed to the respective department’s dispatch center. Therefore, when you call 9-1-1 from a phone within Mesquite City limits, you will be talking to the Dispatchers who work at Mesquite Police Department Communications Center.  If you call 9-1-1 from Bunkerville or Overton areas, your call will be routed to Las Vegas Metro Dispatch.

Where is the Police Administrative Services Division located and what are your hours?

Administrative Services is located at the Mesquite Police Station, at 695 Mayan Circle, Mesquite Nevada.  Fingerprinting services are available on Tuesdays from 10am-12pm and Thursdays 12pm-2pm. Our phone number is (702) 346-5262. After hours, you may enter the lobby and pick up a phone on the counter to contact the Dispatchers at ext. 6911.

How much does it cost to get copies of police reports or arrest records?

Can I get a copy of someone else’s arrest records?

Only the subject of the arrest record may get copies of their record, unless they authorize someone else specifically to obtain the records. Authorization must be written and notarized and the person authorized must have picture identification.

Can I find out if I’m wanted?

The best way to find this information is to contact the courts directly. Because we cannot verify identity over the telephone, we can’t release the information if you call. If you come to Administrative Services in person, we are required to notify an officer, and you may be arrested.

How can I find out more about my case?